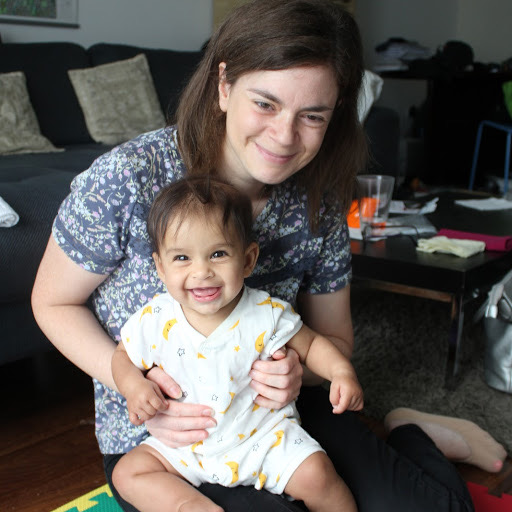 “Anna is a very kind, empathetic person and a good listener. She was non-judgmental (unlike family members).  She was understanding of my needs and those of my children. she was quick to establish a good rapport with all my children, especially my middle child who is on the autistic spectrum. she is a quiet, calm person who has an unobtrusive presence. She supported me very well, both practically and emotionally. She was very reliable and trust worthy. I was able to entrust her with the care of my older children, which gave me more time to focus on the baby. She was also gentle with the baby. She carried out the tasks that I asked her to do and sometimes I did not even have to ask.”

“It was very helpful for us to know that Anna was coming and that we would get a break, particularly in the beginning, before we had the diagnosed dairy allergy as we have a very fussy baby, so it is pretty full on when she’s not there. I was able to pump more frequently as a result of Anna’s help (and shower!) Anna was always willing to help out with any tasks (ie, make a pasta sauce to be used over a few days, cleaning and sterilising bottles, laundry. Her presence made it possible for us to do things together that we hadn’t been able to do since before the baby’s birth (like eat lunch together). There was never any judgement that we switched to full formula feeding from mixed feeding.”

“Anna’s support with my newborn was so valuable. Anna did not dictate as to how to parent however, she provided advice when asked. Anna’s approach was to empower rather than take over, which is what I really valued. Anna had a very gentle good way with my baby. I would definitely recommend Anna as a postnatal doula.”

“Anna came to us when our second daughter was only two days old. She was invaluable in allowing me to get those precious hours of sleep in the first weeks while she cared for my baby. She also helped keeping the house in order and providing nutritious meals. This completely changed my second experience with a newborn and helped with a quicker and smoother recovery. Anna is very caring, kind and soothing with the baby and we very much welcomed her calm and non judgemental presence.”

“Anna helped me carry out every day tasks that were too strenuous for me after a caesarean and helped lift my older daughter. She helped with general household management e.g. dishes laundry and preparing meals. It made the whole experience a lot less stressful. Her personality was non-imposing, she had experience as a mother herself and having worked as a doula. It was good to be around someone at a vulnerable time who had also lost their mother so she could relate. My husband saw the value of having a doula when everyone is sleep deprived, so he was able to focus more on the children rather than other things in the household”

“Anna supported me from when my second child was 6 weeks old to just over 3 months. Anna has a very gentle style and instantly formed a good relationship with my 3 year old son – it was really helpful that Anna could play with him while I looked after my newborn. Over the weeks Anna also looked after my newborn when I had to go out to appointments and fed him bottles of expressed milk. I had full confidence leaving my newborn with Anna, she clearly gets a lot of joy from being around young babies and was so gentle and caring with him. In addition, Anna supported me by making home cooked meals and doing day to day tasks such as emptying the dishwasher and putting the washing out. This helped me to feel looked after in those crazy, unpredictable early days and meant I could focus more on looking after my newborn. I would highly recommend Anna for anyone looking for support from a Doula.”

“Anna joined us when my daughter was three months old. My daughter had been a relatively calm newborn but once she started being more active, the extra hands around the house were so helpful. Anna’s approach is gentle and child-centred and my daughter instantly took a shine to her. Since my daughter kept refusing a bottle, Anna patiently worked with her to learn to cup feed from 4.5 months. She can now take full meals with her cup! I am so grateful to Anna for supporting my family during this time and letting me have a few hours each week to myself”.

“Anna is gentle and kind and always listened to my needs and supported me to the best of her ability. I would highly recommend her to other mothers because of my positive experience. Anna came every day to support me looking after my new born. I was also struggling with breastfeeding and she supported me. She was very helpful in all aspects.”